Home More than a pipeline

December 2016, Robert and cameraman Lex Olthof went to Standing Rock for 3 days to support and to film. With the aim of making a documentary about the situation there.

There is a group of people who really need urgent support. History is currently being written at the Standing Rock Reserve in North Dakota, America. An international conflict is currently taking place. The so-called Dakota Access Pipeline (DAPL) project is held back by members of the Grand Sioux Nation, supported by over 500 other Native American tribes.

Since April 2016 there has been an unresolved conflict in Canon Ball, North Dakota, also known as Standing Rock, the adjacent Sioux reservation. The Dakota Access Pipeline (DAPL) is being built under the Missouri River on Grand Sioux Nation land. It was put to a temporary halt on 4 December 2016 by the Obama administration, The US Army Corps of Engineers refused the requested permit by Energy Transfer Partners, the company responsible for the pipeline. Further investigation via a formal Environmental Impact Statement and the Standing Rock Sioux Tribes Treaty Rights pertaining to Lake Oahe was required. This decision at the federal level came after months of protest by members of the Grand Sioux Nation, supported by 500 Indian tribes, and in collaboration with large international networks. In January this year President Trump signed executive actions to advance approval of the Dakota Access oil pipeline (as well as the Keystone XL after all. The prayer camps have been removed with military force. The Grand Sioux nation still objects and is now fighting this battle in court.

As a documentary film-maker I visited Standing Rock in December 2016 to let the voices of he Sioux be heard, support their cause and to give it global awareness. MORE THAN A PIPELINE is a story about 500 years of suppression of the First Nations and how Standing Rock is basically a next chapter in that story. 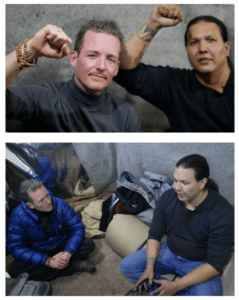 A few thousand Sioux Indians were standing there (together with members of mostly all of the larger tribes from the US and with other helpers) protesting peacefully against the construction of oil pipe lines through their land. Why? The land is a reservation which is natural reserve, it is their water resource and it is one of the last pieces of their ‘holy ground’. It is well known that the Grand Sioux Nation (a sovereign state according to the Fort Laramie treaty in 1851), as well as the Standing Rock Sioux Tribe have been in peaceful protest against the DAPL project for several reasons. There are 17 banks in the bank syndicate supporting the project. Their client is Energy Transfer Partners (ETP), a Texan company with a 38% interest in DAPL. They stood up to point out the potential dangers of this and other projects as well as the potential damage to the environment, damage to water resources and violation of human rights.

‘I had to go there, I had to do something’

They were facing an overwhelming police force who tried to entrap the peaceful ‘Water protectors’ by using teargas, water cannons and rubber bullets, to provoke them to aggression which would be a reason to arrest them. (It is terrible). The many years of oppressing these people have gone through and are still facing today. Even in the 21st century, while you and I are watching. 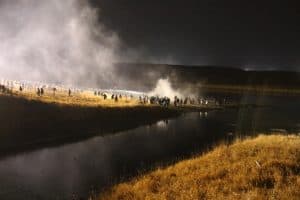 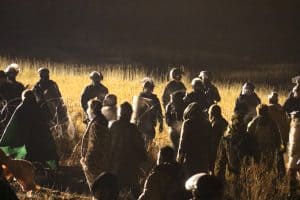 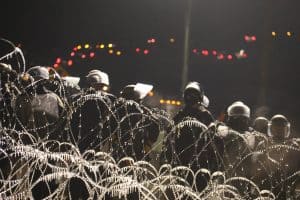 Investors are funding a loan to an oil pipeline. Many might be aware that there have been countless oil spills and other accidents concerning oil pipelines in the US.

Here you will find an overview

At the time that Bridgeman Foundation was there in December 2016, an oil spill occurred at a pipeline 2,5 hours away from Standing Rock. This link will show you the consequences of the spill. The oil has spread over 7 kilometres away from the site where the spill occurred: click here.

American presidential candidate Bernie Sanders said the following during a protest at the White House in September: ‘The pipeline threatens the environment and water resources and exploits Native Americans. It is deeply distressing to me that the federal government is putting the profits of the oil industry ahead of the treaty and sovereign rights of the Native American communities’.

You may have seen the images in which peaceful Sioux, men, women, and elders, have been violently dispersed by several government authorities, among others the North Dakota State Troopers, the National Guard and law enforcement agencies from surrounding states. They have used tanks, grenades, tasers, rubber bullets, bats and water cannons. 140 people have been arrested, among those were many elderly people. Investigation to the way these people have been treated is pending.

On December 3rd, a day after the Sioux tribe had taken legal steps, a Private security firm, hired by ETP brought bulldozers to a Sioux burial site. The made a path of 3200 by 45 meters, crossing holy ground. When unarmed Sioux wanted to protest against the disgracing of their ancestors and the desecration of their land, guards used pepper spray and dogs to chase the Sioux away.

At least six people were bitten by dogs and 30 people were pepper sprayed before the guards and dogs left the area in their trucks. The entire incident was filmed by Amy Goodman of Democracy Now. Frost Kennels from Harville, which was hired by ETP, was not authorized to use these dogs in North Dakota. Several security specialists did not approve of using dogs after seeing the images.

Investors also associate themselves with genocide by funding a loan to ETP. The pipeline crosses or is next to 380 archeological sites of which 26 are adjacent to the current drill site (source: Wikipedia). The statement of the Grand Sioux Nation represented by one of the leaders of the movement, LaDonna Brave Bull Allard, is as follows:

‘The U.S Government is wiping out our most important cultural and spiritual areas. And as it erases our footprint from the world, it erases us as people. These sites must be protected, or our world will end, it is that simple. Our young people have a right to know who they are. They have a right to language, to culture, to tradition. The way they learn these things is through connections to our land and history. If we allow an oil company to drill through and destroy our histories, our ancestors, our hearts and souls as people, is that not genocide?’