This article was written with love. In gentleness and compassion. I hope everyone can read it that way.

It should also be clear that as an author, I am under no illusion that people “in” 3D are better, or less, than people “in” 13D and everything in between. It’s not about superiority, or polarity, but about stages of consciousness.

Humanity is making a consciousness transition from the third to the fifth dimension and beyond.

If you follow me on social media, chances are you inspire and guide others through this transition.

Then you also see that the number of people making the transition has grown exponentially.

Guiding people in their transition from 3d to 5d is not always easy. You have to deal with all kinds of resistances, world views, levels of consciousness and theories. This article wants to help you get some clarity on that.

In the guidance of people to 5D you have to deal with roughly four timelines:

1. 3D: The fear and unconsciousness in the third dimension.

2. 4D: The transition from 3D to 5D through the fourth dimension. More understood, but not yet always a bed of love.

3. 5D: Awakening in the fifth dimension. To live from love and compassion.

4. from 5D to 13D: these are the stages of spiritual awakening.

A large group of people are aware in the third dimension. The system is in control. They may have a feeling that something is wrong, but it hasn’t manifested itself yet. The system still has quite a grip on them and they often still defend it from their DNA programming. They often believe the official narrative and have difficulty accepting arguments that refute it. People who do this are called “wappies,” for example.

A growing group of people are aware of the fourth dimension. They see world events as they are and see through the official stories. In this group there is still a relatively large amount of fear, powerlessness and struggle. The risk is that you will overshoot the mark in far-reaching conspiracy theories. The fourth dimension is the transitional dimension from the third to the fifth dimension.

Those who have awakened to the fifth dimension can look at events in the world with love and compassion. They are living out the New Earth and embody the new man. The system has virtually lost its hold on them and they are free to live their lives.

From the fifth dimension the consciousness can develop further to the thirteenth dimension. These are different stages of enlightenment. Polarization and duality is becoming less and less. 13D is seen as a state of complete oneness with Source.

So when you post about events in the world you have to deal with these four groups.

Suppose you post about the effect of vaccinations on the soul. That vaccinations are designed to separate the person from the soul.

😡People in the third dimension may react angrily, or try to attack you personally. That you’re a public health hazard, or that you’re polarizing. Unconsciously, they defend the system that still has so much hold over them.

😠People in the fourth dimension may go along with you, but often react from conflict and anger. They direct their anger at, for example, the government, the pharmaceutical industry, or other stakeholders. By doing this they are still feeding the system.

🙂 People in the fifth dimension take the message as information and look at the content with compassion and love. They respond substantively and supportively. Substantive criticism is always given lovingly and with respect.

😇People beyond the fifth dimension don’t respond, or with a heart 😄

Of course, it is not all as black and white as described above.

And here comes the punch line:

We all have all these timelines in us at the same time.

Parts of you and me, for example, are consciously in 5D+, but other parts of us are still “in” 3D.

All 13 earth dimensions are always present in every human being….

So it’s not black and white.

Also, these dimensions are only a mental concept. But they do make it easy to understand what is happening in ourselves and around us.

The fact is that humanity is making a transition in consciousness, from fear to love, from taking to giving and from separateness to oneness.

Countervailing forces are doing everything they can to keep humans in the third dimension.

But these forces are fighting a rearguard action…

People are awakening massively and exponentially.

We have been awakening in 5D since 2012. It’s just that not everyone realizes it yet… 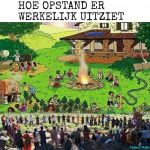